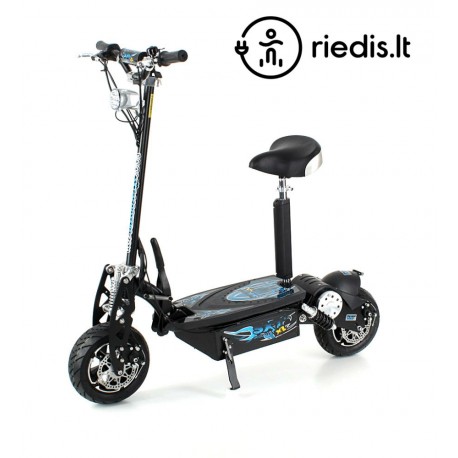 The SXT1600 XL is the big brother of our SXT1000 Turbo. The differences lie in the big, beefy tires that give the scooter a larger and more massive appearance as well as in the "firing" with extremely powerful 48V batteries. Result of higher operating voltage is to increase the maximum distance on a whopping 30 km in ECO mode with the standard lead-acid-battery.

The ECO mode is activated by activating the small red button on the throttle. The scooter then runs to approximately 850 watts derated engine performance and saves a lot of energy. Driving in ECO mode does not change the maximum speed but this is slower than pressure driving in full-power mode because the motor as mentioned works with reduced power. If the scooter is operated exclusively at full power it reaches a maximum distance of at least 20 km with the standard battery. By switching to high-performance batteries, this distance can be further increased enormously. In the Power supply of the electric scooter you have the choice between the standard big Lead acid 48V battery pack with 12Ah and a range of 20 km, the 48V 20Ah LiFePo4 (Lithium) battery with a range of 40 km, and the 48V 30Ah Li-Ion (Lithium) battery with a range of 60 km.

Now many people think all well and good but are deterred by the price of the Lithium batteries immediately - this is to say that these batteries are only assumed being expensive. Once you get the thing but right now just look at it is, that here is essential to compare the number of charging cycles of the batteries. For the standard lead-acid battery, the number of loading cycles is approximately 250 (ie, the battery can be recharged up to about 250 times until it needs replacing with a new one) - however, a Lithium battery can withstand up to 1500 charging cycles. So if looking closely, the result of this comparison is as follows :

If we now compare this total range with each other then its 48,000 : 5,000 = 9,6 times higher yield in the LiFePo4 battery at only about 3,5 times the higher price ergo is the lithium battery on the expected service life considerably cheaper than the lead-acid battery technology. The result is even more evident if you compare the Li-Ion battery.

The braking system of SXT1600 XL corresponds to the current standard of other SXT scooter models and is well adapted to the engine so that the scooter can be accommodated in each situation to a safe stop. Same as our other models, the SXT1600 XL has a side stand as well as its standard equipped with a bell so you can draw attention to themselves before overtaking others.

The scooter has a front and rear-mounted, extremely energy-efficient LED lighting. The taillight assumes the function of a brake light. The battery, being the heart of the scooter is housed in its lower part where it simultaneously contributes to an extremely low center of gravity of the SXT1600 XL and thus a perfect handling. Due to this fact its extremely easy to handle and slipping over while driving is nearly impossible. The elctric scooter can be recharged without removing the battery from its housing by simply using the charging socket located at the right front side of the scooters body.

The large XL tires with a diameter of about 28 cm and a width of 9 cm giving the scooter extreme smoothness while riding it. When bring folded, the scooter has, despite the large tires yet compact dimensions, so that it can be easily stored at any place like in the motorhome & caravan or boat as well in the trunk of a car. To keep the ride comfort at the highest possible level our SXT1600 XL has a full suspension consisting on the front axle from an pressure damper and on the rear axle of two individually adjustable dampers. The Scooter also has a so called "Click & Lock Saddle" which can be removed fast and easy by only pressing the foot lever.

IMPORTANT NOTE!!! SXT1600 XL model is not allowed to be used under road traffic licensing regulations.

SPEED LIMIT!!! The speed of our SXT1600 XL can be technically limited to a max. speed of 20 km/h. This has a positive effect in regards to the approval in road traffic in some countries, so that this model with the reduced 20 km/h max. speed in some countries is treated equal to a bicycle and therefore allowed to operate legally and without authorization. Please check the applicable legal regulations in your country accordingly.

30 other products in the same category: